Thank you for your patience as we continue to navigate the COVID-19 pandemic. Visit COVID-19 Resources for updates and digital learning resources to assist students, teachers, schools and workers impacted by COVID-19.

The Top 3 Things You Should Know 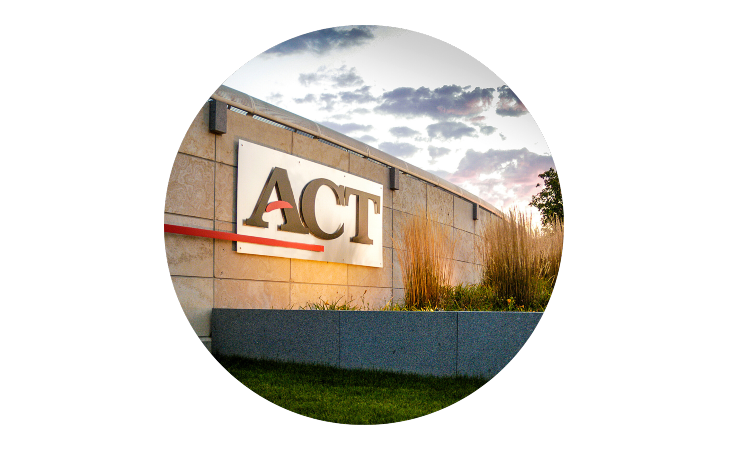 ACT shares in the belief that every student, regardless of their economic status, race or ethnicity, age, gender or gender identity, or geography should have the tools, support and resources they need to succeed in college and career. 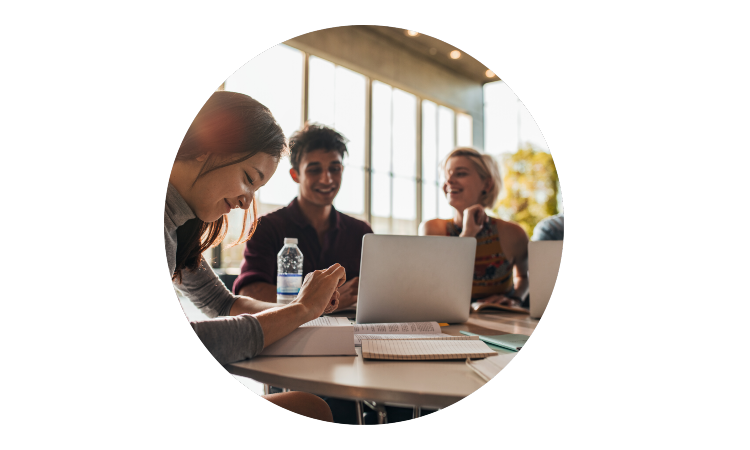 Eliminating standardized testing requirements for the UC system would, in practice, increase the very inequity that the Regents seek to fix.

ACT stands ready to partner with the University of California’s Board of Regents to level the playing field in college admissions, so the dream of a higher education is within reach for all students who seek it.

While addressing inequity issues in our current education system, some have questioned the use of standardized testing as a factor in college admissions decisions. While well-intentioned, the current policy discussion on standardized testing ignores decades of research findings that show test scores are a valid, reliable and effective indicator of students’ readiness for college.

More Than Just a Number

Last year the UC system received a record-breaking 215,000 applications, with a subset of its colleges representing the top six schools applied to in the nation. With this enormous volume of applicants, UC admission offices should have all the tools available to make holistic decisions that recognize and account for the inherent inequities in the education system.

Dedicated to Equity for All Test-Takers

ACT and its coalition of partners are committed to partnering with California’s university system to address equity and access to higher education by making every effort to ensure that testing is fair for all test-takers.

For ACT specifically, potential ACT test questions are put through a thorough internal and external review process, and test results are systematically studied across demographics and geographies to guard against any biases. Through collaborative partnerships with non-profits and advocacy organizations, ACT is also providing the following programs and resources to help level the playing field and bridge opportunity gaps in disadvantaged communities:

What People Are Saying

In an effort to address systemic issues of inequity in the American higher education system, some have questioned the use of standardized test scores as a factor in college admissions decisions. In January 2019, the University of California (UC) Academic Senate was tasked with examining the use of standardized testing in UC admissions—including whether to remove testing requirements altogether.

Below are several key proponents in support of keeping standardized testing in UC admissions. These supporters range from across academic institutions, community-based organizations and major national newspapers.

“UC system should keep the test scores. Doing otherwise because of political or legal pressure or even personal beliefs would belie the very foundation of great universities, which pride themselves on openminded inquiry and fact-based decision making.”

“The key to expanding college opportunity isn’t to eliminate testing but to demand more choice and accountability in K-12 schools.”

“…dropping standardized tests such as SAT/ACT requirements from admissions will create unintended harms against children growing up in underrepresented communities. It exacerbates the issues of “grade inflation” and serves as a bandage to cover up the education achievement gap...”

“The fairest reading of the evidence is that the SAT and the ACT have tremendous value, precisely because they are the only truly uniform, objective and predictive ways to compare candidates with widely varying academic and socioeconomic backgrounds.”

“Going test-optional makes us feel like we’ve removed a barrier to college access, but it doesn’t change the underlying dynamics that brought about the test gap in the first place.”

“While tests should not be the sole basis for admissions, studies show they have real predictive validity and should indeed be part of admissions processes.”

“What matters more than a decision on whether to stop using standardized tests is a broader push to help minority students get better high school educations.”

“I believe that as a practical matter, eliminating the tests could make inequities worse.”

“The significant predictive connection between standardized test scores and multiple metrics of student success provides a means for UC to target assistance towards students who most need supportive services, particularly URMs and first-generation students.”

“…if these tests were eliminated, it would put more emphasis on the high school grade point average, which is not standardized and more dependent on uncontrollable factors.”

“Due to differences in grading systems and school curricula, it is difficult to compare California applicants with non-resident students. Standardized tests provide an opportunity for direct comparison.”

“Premature elimination of the SAT would increase reliance on GPA in the admissions process, a crucial consideration at a time when, as the report stresses, grade inflation has made high school GPA less valuable as a predictor of student success in college, a trend that would likely be further exacerbated if standardized test scores were dropped as an admissions criterion.”

"The elimination of SAT/ACT would adversely affect historically underrepresented student populations. This is because the removal of SAT/ACT requirement would lead to higher weights being placed on high school GPA in the admission process.”

"…ACT/SAT scores enable the University to admit more disadvantaged students than it could without the scores because the University is able to contextualize individual test scores.”

What role does standardized testing play in education?

Standardized testing is a key tool to compare academic achievement across schools, districts and states, allowing school administrators and state leaders to clearly understand whether students are meeting educational standards and where achievement gaps exist and must be addressed. Among the indicators offered by standardized testing is global competitiveness and advancement—the data reveal the knowledge of our nation’s students compared to those of other countries as a measure of workforce development and advancement. In addition, research has shown that the combination of high school grades and test scores provide the single best predictor of a student’s first-year college success, which is why standardized testing is widely used in college admissions decisions.

Why are the University of California (UC) Board of Regents evaluating...

...the use of standardized testing in the UC admissions process?

The UC Board of Regents is attempting to determine whether the use of standardized testing as an admissions requirement contributes to inequity. They created a task force to study this issue. Questions examined by the task force included whether standardized testing fairly promotes diversity and opportunity for students applying to the UC system, and whether standardized testing is a predictor of student success. Members of the Board of Regents will consider whether to maintain the current testing requirements or adopt a test-optional or test-blind policy for the entire UC system.

What are the initial recommendations from the...

The STTF spent the last year carefully researching the use of standardized tests in admissions and found:

Why are some universities going test optional, or removing..

For a variety of reasons, some colleges and universities across the country have removed the use of standardized test scores from their admissions process or made submission of test scores optional. These institutions tend to have smaller enrollments and thus have the capacity to use more personalized admissions criteria, such as in-person interviews and video introductions than do larger schools. For example, in 2019 the University of Chicago and Wake Forest University, both test-optional schools, received approximately 30,000 and 13,000 applicants respectively, whereas the UC system received 215,000 applicants—five times as many as both schools combined.

Are there unintended consequences of removing standardized testing...

Yes. A sweeping decision to reduce or eliminate the role of standardized testing will create unintended consequences that need to be fully considered. For example, such a move could increase grade inflation. Grade inflation is already a problem, particularly in wealthy districts that provide college counselors and offer tailored learning resources, and where assertive parents are often willing to negotiate with teachers. Relying more heavily on grade point averages will put more pressure on schools to give students good grades, making admission decisions more subjective and less fair.

What is the timeline and process for the UC Regent decision?

When will the Board make their final decision?

How does the ACT ensure equity and fairness in their testing process?

ACT is a nonprofit, research-based organization with over 60 years’ experience helping people achieve education and workplace success. The organization continually innovates to ensure fair and accurate measures of college and career readiness and to provide high-quality, scientific evidence in support of education and workforce practices, solutions, and services. ACT takes great care in ensuring that the ACT test is fair to all students, putting all questions through a thorough internal and external review process and systematically studying test results across demographics and geographies to guard against any questions that might be biased against a particular group of students. In addition, ACT’s Center for Equity in Learning—a division within the organization—is focused entirely on closing gaps in equity, opportunity, and achievement for underserved populations through the power of partnerships, research, accessibility and social impact. Learn more at: https://equityinlearning.act.org

What resources and services does ACT provide for underserved students?

ACT constantly researches, innovates and expands its free educational tools and test preparation resources to help students on their journey to higher education and beyond. The organization provides more test-prep resources to students than ever before, offering access to free online learning resources such as video lessons, interactive practice questions, full-length practice tests, education games and other test prep materials. Additionally, ACT offers nearly 55,000 waivers annually to low-income students in California, worth a value of more than $3.7 million. Students who have documented disabilities have access to accommodations on the ACT test to ensure they have equal opportunity to show their academic readiness. ACT also offers test support to U.S. students who are English learners and whose proficiency in English may prevent them from fully demonstrating the skills and knowledge they’ve learned in school.

Aside from offering standardized scores...

...indicating students’ level of college readiness, how else does the ACT help within the admissions process?

ACT scores are also widely used by colleges in course placement, student guidance and scholarships decisions—critical components to ensuring that students succeed on campus. Such use helps ensure that students enroll in courses in which they’re ready to succeed, are aware of majors and careers that match their interests and skills, are eligible for scholarships and are better positioned to graduate on time.